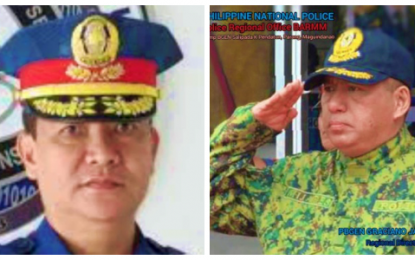 PRO-BARMM CHANGES LEADERSHIP. Brigadier General Marni Marcos (left), incoming chief of the Police Regional Office – Bangsamoro Autonomous Region in Muslim Mindanao (PRO-BARMM), replaced on Tuesday Brigadier General Graciano Mijares (right), who is reassigned to another area. Both graduated at the Philippine Military Academy in 1998. (Combined photos courtesy of PRO-BARMM)
The Police Regional Office in Bangsamoro Autonomous Region in Muslim Mindanao (PRO-BARMM) has changed leadership with the former chief of the Philippine National Police Anti-Cybercrime Group (PNP-ACG) as its new regional director.
Brig. Gen. Marni Marcos, formerly director of PNP-ACG, assumed office on Tuesday as PRO-BARMM head, replacing his “mistah” (batchmate) in the Philippine Military Academy (PMA), Brig. Gen. Graciano Mijares.
Both graduated from the PMA in 1988.
Mijares will take over the post vacated by Marcos at the ACG.
Mijares will be leaving a police organization that played major roles in settling amicable clan wars involving Moro families in the provinces of Maguindanao, Lanao del Sur, Basilan, Sulu, and Tawi-Tawi.
As he leaves PRO-BARMM, his home for the past year and a half, Mijares called on the officers and rank and file personnel to give Marcos the same support he received from them. (With a story from PNA)

Why settle for less when you can have the best.