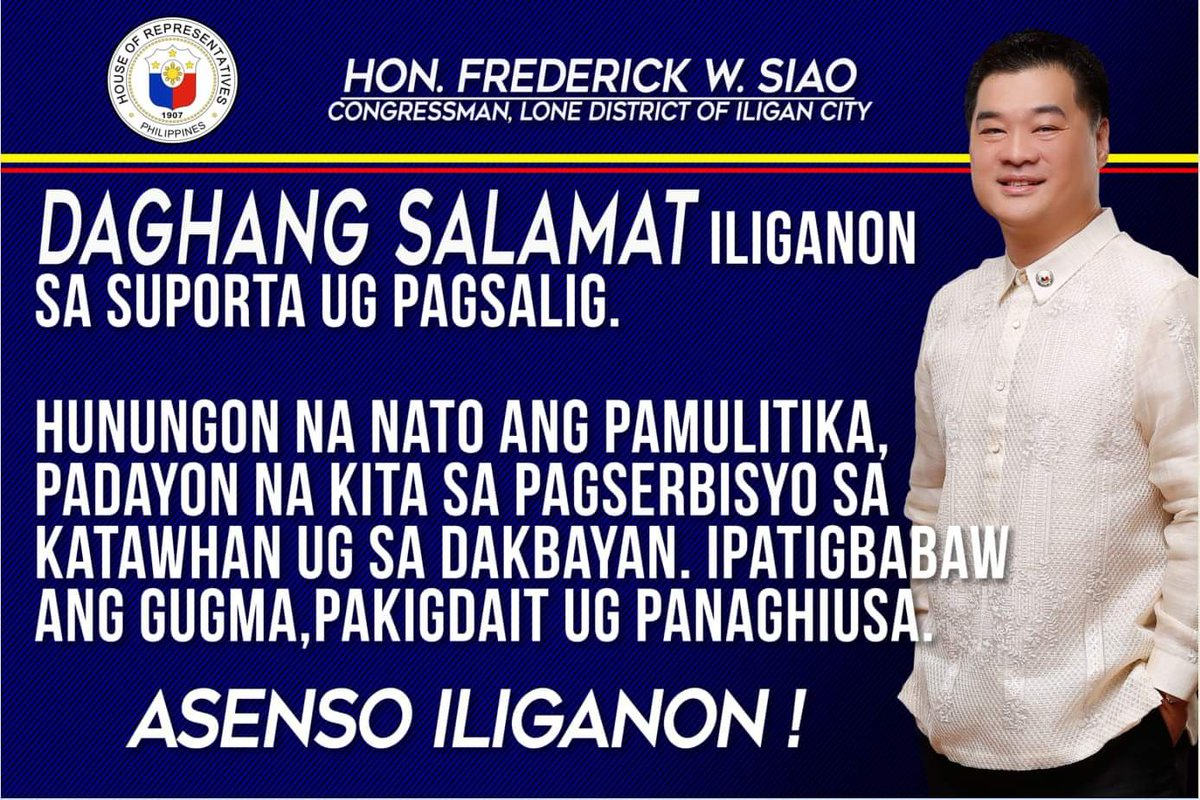 ILIGAN CITY: Re-elected Representative Frederick W. Siao of the lone district of this city recently assailed Sandiganbayan Suspension Order on him and said it is already ‘moot and academic” and it has no basis.
In a Twitter statement, Congressman Frederick W. Siao said, “For now, the decision on how to deal with the Sandiganbayan preventive suspension order is with House Speaker Gloria Macapagal Arroyo who was given five days to respond to the court order to implement the suspension.”
“There is no need for any sort of preventive suspension because I am not in any position to cause any tampering or loss of evidence nor pressuring of any personnel of the City Council or of City Hall, because I am not an incumbent member of the City Council of Iligan City…” said Siao.
Siao further pointed out that the purpose of the preventive suspension order is now “moot and academic” because the prosecution has already presented its evidence and rested its case.
“Since there is no necessity for my preventive suspension, the Sandiganbayan suspension has no basis,” he said.
The Sandiganbayan has placed Siao under a 90-day preventive suspension amid a graft complaint filed against him over alleged illegal leasing of government lands in the province.
In a resolution dated May 21, the Sandiganbayan Third Division said Siao’s suspension is valid even if the lawmaker argued it is no longer necessary since the prosecution has already rested its case, thus, “there is no longer any danger that he may tamper with any records and evidence or intimidate the witnesses with his influence and authority.”
But the resolution by Presiding Justice Amparo Cabotaje-Tang asserted: “While indeed the prosecution had rested its case, the presumption is that unless the accused is suspended, he may frustrate his prosecution or commit further acts of malfeasance or do both.”
The graft complaint against Siao stemmed from his alleged participation in authorizing former Iligan Mayor Lawrence Ll. Cruz to extend the lease of local government lands when he was still city councilor.
The lease agreement, which was first entered into in 2004, supposedly did not go through public bidding. It was also revealed that the contractors leasing the lands – Kiwalan Lumber Company and Salvatori Development Corp. – were related to Cruz’s mother.
Siao noted that according to the Rules of the House of Representatives, the authority to suspend any member rests with the entire body and must gain two-thirds vote to be approved.
According to the House Rules, the House Committee cannot suspend any of its members for more than sixty days, in contrast to the ninety days suspension the Sandiganbayan has ordered.
It is the House of Representatives that have the jurisdiction over me and the matter would most likely be taken up by the House Committee on Rules, the Iligan congressman said.
A copy of the Sandiganbayan resolution will be forwarded to the Speaker of the House of Representatives for enforcement. After 90 days, the suspension order would immediately be lifted, the anti-graft court said.
Siao emphasized also that he did not reap any financial gain from the alleged Illegal lease of land for the southbound terminal bus in Iligan City referred to in three separate city council resolutions issued on September 21, 2004, December 23, 2008 and March 4, 2013. “Rather, the City of Iligan and its people have benefited from the lease of land,” he emphasized.
Siao won for a second term as Iligan City congressman in the May 13 midterm elections. He will serve in the 18th Congress until 2022
Siao said the determination of the illegality of the assailed lease of land in Iligan City years ago can be made only upon a final judgment which has not happened. “Until such time, I shall continue to discharge my duties and responsibilities as duly-elected representative by the people as mandated by law as Iligan lone district representative in the House of Representatives.” (ATM/RSP).