ARMM has the highest number of hotspots for 2019 midyear elections 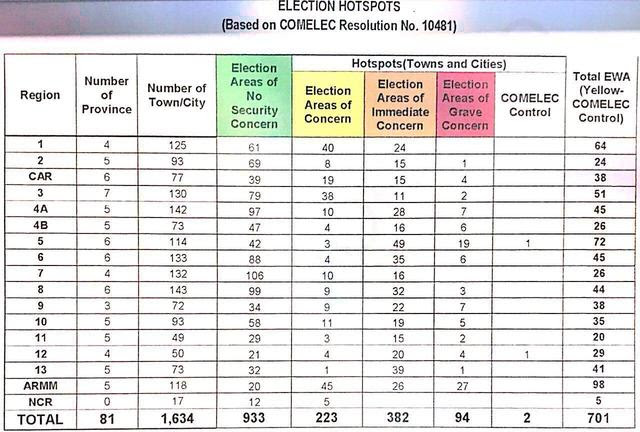 MARAWI CITY: The Commission on Elections (COMELEC) has identified at least 701 hotspots across the Philippines in the 2019 May elections with the Autonomous Region in Muslim Mindanao having the highest number.
The list of the 701 hotspots that account for 42.9% of all cities and municipalities in the country is based on the list released by the Philippine National Police (PNP) as the official campaign period began on Tuesday, February 12.
The remaining 57.1% or 933 were declared as areas “of no security concern.”
The PNP broke down its tally based on region and severity of concern as defined by Commission on Elections Resolution No. 10481.
Yellow areas are “areas of concern,” orange areas are of “immediate concern,” and red areas are of “grave concern.”
ARMM which recently held a plebiscite on the ratification of the Bangsamoro Organic Law has 27 red areas, 26 orange areas, and 45 yellow areas.
So far, Metro Manila has the lowest number of hotspots with only 5, all of which have been declared yellow areas. Aside from the capital region, the Ilocos and Central Visayas regions also registered no red areas.
The PNP has yet to release a more detailed list naming the specific areas considered as election hotspots.
According to PNP chief Director General Oscar Albayalde, they are currently studying “realignment” for strategic deployment of cops, given the hundreds of threatened areas.
The list of hotspots will be updated as the election period moves forward. (ATM/RSP)