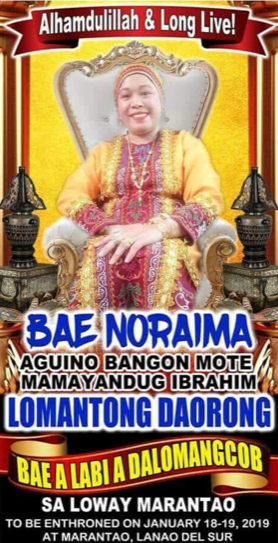 “In Maranao royalty, Maranao women have their own duties and responsibilities.
The highest rank of a woman called ‘Bae-a-labi’ is an island onto herself.”
SHE is an all-around personality in the community. Hence, on the 18th-19th of January 2019 or 12 Jumada al-awwal – 13 Jumada al-awwal 1440, Noraima Aguino Ibrahim, the 36-year old and only daughter of the couple Noron Aguino Ibrahim and Abner Mangubat Ibrahim, a member of the Philippine National Police in Calanugas Police Office was enthroned as Bae a-Labi in Lowai Marantao, Lanao del Sur.
Her mother and father are both members of the Royal Family of the Sultanates of Lanao. The mother is better known as NORON AGUINO MOTE IBRAHIM the reigning BAE A CABUGATAN SA ROMAGUNDONG. 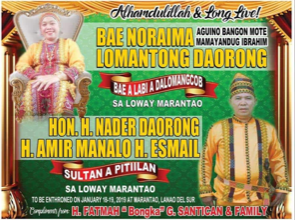 While the father, as a member of the PNP, is popularly known as “Sarhento“ in the community. His Royal Title is ARIMAO BAGAY DAORONG IBRAHIM.
Being both parents are of Royal blood, she was finally enthroned as BAE A LABI NORAIMA AGUINO MOTE BANGON BAGAY IBRAHIM LOMANTONG DAORONG the BAE A LABI A DALOMANGCOB SA LOWAI MARANTAO.
Along with her coronation as Bae a-Labi was also the enthronement of her cousin HON. H. NADER DAORONG H. AMIR MANALO H. ESMAEL as the SULTAN A PITIILAN SA LOWAI MARANTAO.
The Sultanates of Lanao in Mindanao were founded in the 16th century through the influence of Shariff Kabungsuan, who was enthroned as first Sultan of Maguindanao in 1520.
The Maranaos of Lanao were acquainted with the Sultanate system when Islam was introduced to the area by Muslim missionaries and traders from the Middle East, Indian and Malay regions who propagated Islam to Sulu and Maguindanao.
Unlike in Sulu and Maguindanao, the Sultanate system in Lanao was uniquely decentralized.
The area was divided into the Four Sovereign States of Lanao (Pat a Phangampong a Ranao known as Bayabao, Masiu, Unayan and Balo-i) which are composed of a number of royal houses such as the Sapolo ago Nem a Panoroganan (The Sixteen Royal Houses) Go so Duapuluh go Walo a Mbabaya ko Taritib (Twenty Eight  Parliament) with specific territorial jurisdictions within mainland Mindanao.
This decentralized structure of royal power in Lanao was adopted by the founders, and maintained up to the present day, in recognition of the shared power and prestige of the ruling clans in the area, emphasizing the values of unity of the nation (Kaiisaisa o Bangsa), patronage (kaseselai) and fraternity (kaphapagaria).
They had maintained and had successfully defended their Sultanate from all Spanish attempts.
After the last attempt, the Spanish never again ventured in all their duration in the Archipelago for 333 years. (JIJ/RSP)