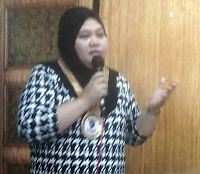 MARAWI CITY — Judge Wenida B.M. Papandayan of RTC Branch 10 in Lanao del Sur said that the journalist who is gathering information in the field has great responsibility than the outfit carrying his story.

In her keynote address during the First Induction Ceremony of Sarimanok Press Club, she said the journalist in the field tries to get the facts and the truth of the incident being covered. She said the journalist investigates to get the truth by validating, verifying and checking the information to ensure that it is accurate before reporting the incident for public consumption.